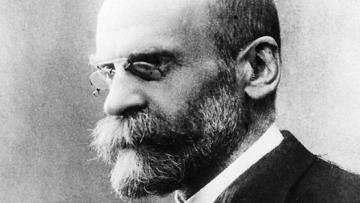 French sociologist Emile Durkheim (1858-1917) was a philosopher and sociologist whose theoretical work on religion, society, and the ways individuals interacted with their social spheres continues to influence us today. His seminal 1912 work, The Elementary Forms of Religious Life, remains one of the most important conceptual frameworks for understanding the parallels between – and co-production of – religion and other forms of culture, including national, ethnic, and civic identity. The structuralist premises of the text inform French theory throughout the twentieth century so powerfully that many post-structuralist and post-modernist thinkers do not even reference Durkheim directly – and yet Durkheimian thought remains foundational in most French theoretical materials, and much sociological thought.

Established by Durkheim scholar W.S.F. (Bill) Pickering in 1991, the British Centre for Durkheimian Studies provides a central forum and hub for the study of religion. Now based in the Faculty of Theology and Religion at the University of Oxford, it supports and promotes scholarship in multiple Durkheimian fields, including religion, anthropology, sociology, law, and politics. It sustains the publication of major monographs, edited volumes, and dedicated journals, primarily with Berghahn Books, a press with which we have an enduring relationship, and in terms of teaching social theory of religion at both undergraduate and post-graduate levels.

Sondra L. Hausner is Professor of Anthropology of Religion at the University of Oxford, and Fellow and Tutor in Theology and Religion at St. Peter's College, Oxford. She is the editor of Durkheim in Dialogue: A Centenary Celebration of The Elementary Forms of Religious Life (Berghahn Books 2013), and the author of two Durkheim-inspired monographs, Wandering with Sadhus: Ascetics in the Hindu Himalayas (Indiana University Press 2007), which won the Joseph W. Elder Prize in the Indian Social Sciences, and The Spirits of Crossbones Graveyard: Time, Ritual, and Sexual Commerce in London (Indiana University Press 2016), as well as the co-editor of five volumes on religion in diaspora, religious life in South Asia, and social theory on religion. She has published widely on religion and ritual; the religion and society of South Asia; the dynamics of diaspora religion and globalization; feminist theory; and Durkheimian thought. She has been the Director of the British Centre for Durkheim Studies since 2017.

Robert Parkin is an Emeritus Fellow of the School of Anthropology and Museum Ethnography, where he was formerly a Departmental Lecturer in Social Anthropology. His previous post was as a lecturer at the University of Kent at Canterbury. As well as his interest in the Durkheim school, he has worked on issues to do with kinship and marriage, identity and politics, and religion in relation to South Asia and parts of Europe, especially western Poland, on all of which he has published. In connection with the Durkheimian legacy, he has written on the work of both Louis Dumont and Robert Hertz, and has also translated the latter's work on sin and Henri Hubert's work on time into English.

Wendy James is at present Emeritus Professor of Social Anthropology and Fellow of St. Cross College, Oxford. Her research has been focused on peoples of the Sudan and Ethiopia. A former student of E.E. Evans-Pritchard, she has always been conscious of a debt to the Durkheim school, as reflected in her general book, The Ceremonial Animal: A New Portrait of Anthropology (OUP, 2003).

After studying classics and medicine, N.J. Allen qualified in social anthropology at Oxford, undertaking fieldwork in Nepal. He lectured at Durham and, from 1976-2001, at Oxford, where he became Reader in the Social Anthropology of South Asia. Apart from kinship theory, he has published on the Himalayas, the Durkheimian School, and Indo-European comparativism. Several of these interests are represented in his book, Categories and Classifications (Berghahn, 2000).

Susan Stedman Jones studied at University College London (Philosophy and postgraduate Anthropology). She later completed a PhD in Philosophy, ‘From Kant to Durkheim’, while teaching Philosophy of Social Science and Sociological Theory at Goldsmiths College. She left to do independent research and has given papers in China, Canada, Brazil, Germany and France at international conferences. She published ‘Durkheim Reconsidered’ in 2001 and has contributed papers to collections on Durkheim (edited by Bill Pickering), e.g. ‘Durkheim and Representations’ (2000) and ‘On Durkheim’s Elementary Forms of Religious Life’ (1998). Journal articles include ‘Durkheim, the Question of Violence and the Paris Commune of 1871’ (The International Social Science Journal, 2009) and ‘Forms of Thought and Forms of Society: Durkheim and the Question of the Categories' (L’Année Sociologique, 2012). She has collaborated with the British Centre for Durkheim Studies since 1992, where she has been a regular contributor to its conferences and study days.

Willie Watts Miller was a close colleague of the late W. S. F. Pickering, founder of the Centre, has edited Durkheimian Studies / Études Durkheimiennes for many years, and since his last book, A Durkheimian Quest: Solidarity and the Sacred (2012), has continued to write on various issues, but especially to do with Durkheim and anthropology and Durkheim and an ongoing modern crisis.

Marek Sullivan holds a DPhil from the University of Oxford, specializing in the intellectual and cultural history of Modern Europe. He is the current Editor-in-Chief of The Oxonian Review, Managing Editor of the Journal of Secularism and Nonreligion, and Features Editor of The Religious Studies Project.

2017 marked the centenary anniversary of the French sociologist Emile Durkheim’s death, and a new phase of life for the British Centre for Durkheimian Studies, which moved into its new home in the Faculty of Theology and Religion. To mark the transition, an inaugural workshop for the regenerated Centre, entitled ‘Why Did Durkheim Have to Die?’, took place on September 28, 2017 at St. Peter’s College, Oxford. The workshop provided a forum for the consideration of the place of Durkheimian thought in the field of religion over the course of the 20th century, identifying ways in which Durkheim’s theoretical work has been instrumental in European and American structuralist, post-structuralist, modernist, and post-modernist approaches – even when it has not always been explicitly acknowledged. The BCDS emphasized its commitment to the study of religion through robust, ongoing analyses of classical thinkers in the field, as well as a consideration of the ways these theoretical frames continue to inform debates and scholarship on religion in the modern world. An international team of scholars attended the conference, including Bruno Karsenti (EHESS, Paris), Simon Coleman (Toronto), Elisabeth Hsu (Oxford), Johannes Schick (Cologne), Mario Schmidt (Cologne), Erhard Schüttpelz (Cologne), Ulrich van Loyen (Cologne), Ruy Blanes (SNRC, Santiago de Compostela), Robert Parkin (Oxford), Ramon Sarro (Oxford), and Roland Hardenberg (Goethe University, Frankfurt am Maim).

In collaboration with Berghahn Books, the BCDS publishes both a Durkheim Series dedicated to primary scholarship through new critical editions, commentaries, and translations of Durkheim’s circle and his interlocutors (including the Année Sociologique, as well as works by and about Auguste Comte, Marcel Mauss, and Henri Hubert, to name a few) and a bilingual journal, Durkheimian Studies (Études Durkheimiennes). The journal is concerned with all aspects of the work of Durkheim and his group, such as Marcel Mauss and Robert Hertz, and with the contemporary development and application of their ideas to issues in the social sciences, religion, and philosophy. It is unique in often featuring first-time or new English translations of their French works otherwise not available to English-language scholars.

Selected Works of the BCDS Published with Berghahn Books

Willie Watts Miller, A Durkheimian Quest: Solidarity and the Sacred (2012).

Robert Parkin and Anne de Sales (editors), Out of the Study and into the Field: Ethnographic Theory and Practice in French Anthropology (2010).

History of the BCDS

The British Centre for Durkheimian Studies was established by Durkheim scholar W.S.F. (Bill) Pickering in 1991, and housed in the School of Anthropology and Museum Ethnography until Bill’s death in 2016. At the beginning of 2017, the Centre was transferred to the Faculty of Theology and Religion, from where we hope to foreground the Faculty’s central role in promoting Durkheimian studies in the UK, particularly in the area of theoretical research on the social contours of religion.

On 7 March 1991, at the initiation of W.S.F. (Bill) Pickering, a group of interested academics met at St Antony’s College, Oxford, where he was a Senior Member, to consider forming a Centre for the study of Emile Durkheim. The group included Philippe Besnard of Paris. With the help of Herminio Martins, fellow of St. Antony’s College, Bill Pickering had already organised a number of seminars on Durkheim in the College. At the meeting it was decided that such a Centre should be created and Professor John Davis, head of the Institute of Social and Cultural Anthropology (commonly known as ISCA), indicated that the Centre would be welcome to make its home in the Institute. One of the reasons for accepting his offer was that the library of the Institute had a very good collection of books by and on Durkheim and his followers. There was also an historical connection for professors of the Institute, E.E. Evans-Pritchard and, later, Rodney Needham, as well as other teachers in the Institute, had led the way in introducing the work of Durkheim to the English-speaking world, through translations of his work and that of some of his disciples.

The first committee meeting took place in ISCA on 25 October 1991, when it was decided that what was to be called the British Centre for Durkheimian Studies should be initiated on a voluntary basis. Members agreed that it should go ahead straight away, with virtually no financial support. Bill Pickering was appointed as the secretary or organizer. Notices about the existence of the Centre were to be sent out to universities throughout Britain and to certain universities overseas. The Centre was to be governed by a committee with the professor of ISCA as its chairman.

According to the first brochure printed and sent out to all British universities and institutes, the general aims of the Centre were to create:

The first international conference involving the Centre was held in July 1993 in conjunction with the centennial meeting of the Association of Social Anthropologists of the Commonwealth held at St Catherine's College. The title of the Centre's contribution was ‘Durkheim's Division of Labour: A Centennial Assessment’. A larger conference was held on July 1995 at the Maison Française with the title ‘Reassessing Durkheim's Elementary Forms’. About 60 people registered for it and 28 papers were given, with lecturers coming from Japan, Canada, the United States, Italy, Germany, Hungary, as well as from France and Britain. In July 1996 a conference was organized by Geoffrey Walford (Department of Educational Studies, Oxford) and Bill Pickering on Durkheim and Education at which 14 papers were given. In September of that year Wendy James and Nick Allen, both of ISCA, organized a conference on Marcel Mauss at which 38 papers were presented. To commemorate the centenary of the publication of Durkheim's Le Suicide, Geoffrey Walford and Bill Pickering decided to arrange an international conference at the end of 1997. About 30 people attended, from France, Canada and Japan.

A conference entitled '150 Years after the Birth of Durkheim' was organized in Oxford on 10-12 October 2008. A programme can be seen below. Most of the conferences that took place during the years of Bill’s directorship took place at the Maison Française Oxford.

The Centre previously held Study Days at the Maison Française about 2-3 times a year. Just over 40 Study Days took place, covering such topics as: